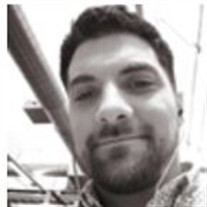 Anthony L. Tomaino, age 36, passed away on Thursday, June 4, 2020. He was an amazing husband, father, son, brother, friend, mentor and coach as well as a NY Giants fanatic, athlete, and golf nut. Born and raised in Oneonta, NY by his proud parents, father James George Tomaino Jr. and his late mother Maria Victoria Melo. He attended St. Mary's Catholic School and graduated from Oneonta High School in 2001 where he participated as a three sport athlete. Anthony remained in Oneonta pursuing a double major and received a Bachelor of Arts from Hartwick College, Class of 2005. He played football at the highest level by being top 5 All-Time in Hartwick Football History in many statistical categories. He was Captain of the football team, pre-season All-American, and #2 in the nation for defensive backs for pass breakups. Anthony moved to South Carolina in 2005 where he began his successful career in technology development. More recently he was able to reconnect with his love of football as a guest commentator on the Talkin' Giants, a NY Giants focused podcast with ultimate plans to do more as a commentator and a sportscaster. Whether Anthony was talking technology, sports, or just connecting with his family and friends, his larger than life personality was electric, lighting up a room of two or two thousand. He is survived by his best friend and wife Leah, amazing daughters Scarlett, Ava, Stella and Nina, his father Jim, siblings James, Nicole, Michelle and Ben, loving mother-in-law Marieta, father-in law Richard, sister-in-laws; Rebecca, Anna, Megan, brother-in-laws; John, Matt, Phillip, nieces;Dominique, Maria, Victoria, Perrin, nephew; Maximo, as well as numerous aunts, uncles, and countless friends. Arrangements in care of Charleston Cremation Center and Funeral Home and a gofundme has been set up to help his wife and 4 daughters during this difficult time: https://www.gofundme.com/f/tomaino-family/. What we can all learn from Anthony is that we should do what we want more often, spend time where it matters most, keep striving to live your dreams, and touch as many hearts and minds as possible with kindness and generosity. It matters.

Anthony L. Tomaino, age 36, passed away on Thursday, June 4, 2020. He was an amazing husband, father, son, brother, friend, mentor and coach as well as a NY Giants fanatic, athlete, and golf nut. Born and raised in Oneonta, NY by his proud... View Obituary & Service Information

The family of Anthony Luiz Tomaino created this Life Tributes page to make it easy to share your memories.

Send flowers to the Tomaino family.