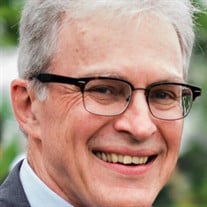 Richard Joseph Nunan passed away at home on April 12, 2021, following a battle with brain cancer. Born January 26, 1952 in Cork, Ireland, he immigrated with his family to Birmingham, Alabama in 1958. After meeting his wife Victoria as students at Vassar College, he earned his doctorate at UNC Chapel Hill. The couple settled in Mount Pleasant, South Carolina, where they raised their two daughters. Richard taught philosophy at the College of Charleston for 36 years. Whether his students were time-travel enthusiasts, passionate about LGBTQ+ rights, or just very reluctant to learn logic, he loved teaching them. He taught and wrote on wide-ranging topics, including philosophy of film, law, and ethics. When not at work, he loved puttering in his garden, watching sci-fi movies of varying quality, traveling with his wife Victoria, and conducting a life-long campaign to trick his daughters into loving Bob Dylan as much as he did. Richard is survived by his wife Victoria West, daughters Rebecca Nunan (Victor Trac) and Alexandra Nunan, brothers Mark Nunan and Tom Nunan, sister Adrienne Ruthven, step-mother Margie Nunan, countless other beloved family members and friends, and grandchildren Finn and Maeve, already hard at work on their time machine schematics in his honor. He was predeceased by his parents, Timothy Nunan and Carmel Cotter Nunan, and his brother, Timothy Nunan. Because of the pandemic, Richard’s life will be celebrated at later dates in Charleston and Ireland. In lieu of flowers, donations may be made to Metanoia (http://pushingforward.org/) in North Charleston, Planned Parenthood (https://www.plannedparenthood.org/), and the Scholarship Enrichment Fund at the College of Charleston (https://giving.cofc.edu/areas-to-support/scholarships/).

Richard Joseph Nunan passed away at home on April 12, 2021, following a battle with brain cancer. Born January 26, 1952 in Cork, Ireland, he immigrated with his family to Birmingham, Alabama in 1958. After meeting his wife Victoria as students... View Obituary & Service Information

The family of Richard Joseph Nunan created this Life Tributes page to make it easy to share your memories.

Send flowers to the Nunan family.