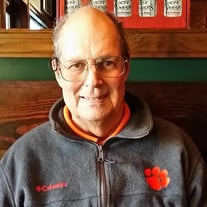 Richard Champion Davis, Jr. 71, of Mount Pleasant, South Carolina, husband of Julia Davis, died Thursday, October 31, 2019. His memorial service will be held at 1pm Friday, November 22, 2019 at St. Andrews Church, 440 Whilden St., Mt. Pleasant, SC. The family will receive visitors at the home following the service. Interment will be private. Rick was born June 28, 1948 in Winston Salem, NC, son of the late Richard Champion Davis and Ella deSaussure Hunter Davis. Rick was a professional engineer with graduate degrees from Clemson University in Civil Engineering and a Masters in engineering from the University of South Carolina. He was a member of the ROTC while at Clemson and served in the United States Air Force after graduation. Rick was the Public Works Engineering Director at the Charleston Naval Shipyard prior to becoming the Program Manager for Environmental Restoration and Munitions Response with the Naval Facilities Engineering Command Southeast. He was selected as GS-15, Senior Civilian to lead the Charleston branch closure when the NAVFAC command was relocated to Jacksonville, Florida. Rick received two Meritorious Civilian Service Awards, was former President of the Civil Engineers Club of Charleston, and member of the Federal Executives Association. He was a former president of the Coastal Carolina Aquatics Association, a referee/starter for USS Swimming, and a member of the Hobcaw Yacht Club. Rick was a member of St. Andrews Church. Rick’s love of the great outdoors was reflected in his hunting, fishing and boating. He discovered his love of being on the water early in childhood at Pawley’s Island and by his teens, he was skiing in Miami and spear fishing in the keys. As the manager of Big Ocean Hunt Club, Rick spent many tireless hours working and planting food for the deer and placing cameras to watch the wildlife action. He and his lab, Sheba, spent a lot of time riding the kabota through the woods and delighting in a find of “fat lighter.” He and his fellow hunters could be found sharing hunting stories around a huge campfire many weekends during the hunting season. Rick is survived by his wife of 49 yrs; his sister, Sara deSaussure Davis; his sons and their wives: Champ and Kathleen, Alex and Crystal, Will and Mary. He also is survived by grandchildren Luke, William, Matthew, Ethan, Emma, Godwyn, Griffin, Read and Tyler Dennis. Rick was preceded in death by his parents and his sister Daisy Hunter Davis. Special thanks to the Paladium Hospice team, Dr. Rex Morgan, and Erika Darling. Sign and view guestbook https://www.CharlestonCremationCenter.com. In lieu of flowers, memorials may be made for Alzheimer’s research at https://www.rsfhfoundation.org/donate, designate “CBRI-Alzheimer’s Research.”

The family of Richard Champion Davis Jr. created this Life Tributes page to make it easy to share your memories.

Send flowers to the Davis family.