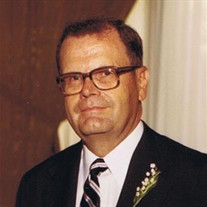 Paul Harwood Millar, Jr. died on July 12, 2019, at MUSC Hospital in Charleston, SC. He was born in Little Rock, AR, on July 15, 1926, to Artie (Clark) and Paul H. Millar, Sr. After graduating from Little Rock High School, he joined the United States Navy, trained to become a radioman, and served on the USS Rixey during World War II. Upon discharge from the service, he attended Hendrix College, where he completed the prerequisites for entry into medical school at UAMS. He graduated from medical school in 1951, interned at the University of Iowa, and completed his surgical residency at UAMS. He married Margaret Ann Woods in 1948. Dr. Millar was legendary in Arkansas County as a brilliant and tireless surgeon. Countless former patients and their families say that he saved their lives. When he retired in 1994, he had performed 18,210 surgical operations at Stuttgart Memorial Hospital. He loved his farm near De Valls Bluff and took great pleasure in cutting hay, raising cattle, and helping his beloved grandchildren fish in the ponds. When he and Margaret Ann were younger, there was often an orphaned calf in their spare bathroom or a flock of chickens in their yard. He was an avid reader who loved history and always followed the news. Dr. Millar was preceded in death by his wife and his son, John Paul Millar. He is survived by his sister, Elizabeth Millar Rush, of Los Altos Hills, CA; his daughters, Susan Millar Williams (Dwight) of McClellanville, SC, and Cathy Woods (Tom) of Boulder, CO; daughter-in-law Anne Millar Williams (Chuck), of Mt. Pleasant, SC; and his grandchildren Alex Woods of Seattle, WA, Olivia Black (Jeff) of Boonsboro, MD, Emily Woods of Decatur, GA, Ryan Millar of Houston, TX, Allison Millar of Charleston, SC, and Paul D. Millar of Mt. Pleasant, SC. For the past two years, Dr. Millar had lived at Summit Place on Daniel Island, SC. The family is deeply grateful for the kindness and care of the staff. His remains will be buried at Oak Grove Cemetery in Conway, AR. There will be no formal service. Memorials can be sent to the Stuttgart Public Library, Hendrix College, or the Museum of the Arkansas Grand Prairie.

The family of Dr Paul Harwood Millar Jr created this Life Tributes page to make it easy to share your memories.

Send flowers to the Millar family.