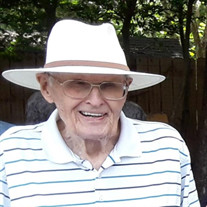 Mervyn Stewart Knobloch, aged 91, of Mt. Pleasant, SC, passed away peacefully on June 17th, 2021. He was born in San Francisco, CA to Charles Ferdinand Knobloch and Vera Charlotte Stewart. After graduating from Abraham Lincoln High School in San Francisco he attended the San Francisco City College before transferring to the University of California at Berkeley, where he graduated with a B.A. in Economics. He was then drafted and served in the U.S. Army in Germany during the final year of the Korean war. After discharge from service he worked for several newspapers in southern California as a reporter and editor. He met his loving wife of over 50 years, Shirley Ann Struble of Hayward, California, a Stanford Nursing School graduate, while on a tennis date. They married and had three children before settling in Arlington, VA in 1965, after he took a position with The Washington Star newspaper as an editor. In 1971, he left for a position with the U.S. Bureau of Labor Statistics, as the managing editor of their Monthly Labor Review publication, where he worked until retiring after 20 years. Upon retirement he learned to play and became an avid golfer as a member of the Arlington Seniors Golf Club, studied Contract Bridge and Spanish, and enjoyed traveling. He was a lifelong member of the National Press Club and PBS supporter, with a passion for history, literature and reading. A devoted husband and a loving father; he had a sharp mind, an inquisitive nature, a quick wit, and a wonderful sense of humor. He will be dearly missed by his family and friends. He was predeceased by his beloved wife Shirley Knobloch, 90. He is survived by their three children Valerie Knobloch, Carole Knobloch and Dana Knobloch; three grandchildren Michael Knobloch, Danielle Dickson, and David Knobloch; and two great-grandchildren Leah Knobloch and Evan Knobloch. A private memorial service will be held at a later date. In Lieu of flowers, memorial donations in Mervyn's honor may be made to the Cure Alzheimer's Fund, 34 Washington St., Suite 310, Wellesley Hills, MA 02481 or @ curealz.org.

The family of Mervyn Stewart Knobloch created this Life Tributes page to make it easy to share your memories.

Send flowers to the Knobloch family.