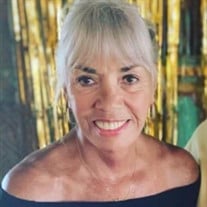 Madelyn Graf, 72, returned to her Heavenly Father on July 28, 2021. She was a beloved wife, mother, grandmother, sister, aunt, and friend. Madelyn was born in New York on July 17, 1949. It was there that she met and married her husband of more than 51 years, Jim Graf. She was a proud mother of three daughters. Madelyn spent decades working as a nurse in both New York and South Carolina, but her service to the community extended far beyond the hospital. Even after she was diagnosed with cancer, Madelyn spent time volunteering with Meals On Wheels and James Island Outreach. She also enjoyed being part of the flower guild at church. In 2009, she joined Dragon Boat Charleston and found an incredible support system of teammates, friends, and cancer survivors. Some of her happiest times were spent paddling on the Ashley River and traveling to competitions with the DBC team. During her lengthy battle with cancer, Madelyn’s strength, grit, and grace inspired every person she knew. She refused to let her illness define her. The family wishes to send a special thank you to Dr. John Wrangle, Madelyn’s oncologist at the Medical University of South Carolina. He was her biggest advocate and gave her the gift of more time. Madelyn is survived by her husband, Jim; children, Allison (Greg), Meredith, and Heather; grandson, Leif; twin sister, Marilyn; her brother, John; as well as numerous relatives and friends. She was predeceased by her parents, Agnes and John; her sister, Betty Ann; and her brother; Arthur. A memorial service will be held at 11 a.m on August 3 at Saint James Church: 1872 Camp Road, Charleston, South Carolina. Madelyn will be forever missed and remembered. Memorial donations can be made to Dragon Boat Charleston https://www.dragonboatcharleston.org/

Madelyn Graf, 72, returned to her Heavenly Father on July 28, 2021. She was a beloved wife, mother, grandmother, sister, aunt, and friend. Madelyn was born in New York on July 17, 1949. It was there that she met and married her husband of... View Obituary & Service Information

The family of Madelyn Mary Graf created this Life Tributes page to make it easy to share your memories.

Send flowers to the Graf family.