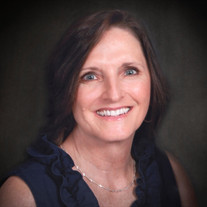 Lori Webster Blackburn, 57, of Mount Pleasant, SC, entered into eternal life on October 26, 2019. Family and friends are invited to a celebration of Lori’s life at 2:00 pm on Saturday, November 2, 2019 at Mount Pleasant Presbyterian Church, 302 Hibben St. A reception will follow. Please wear blue in celebration of Lori’s favorite color or pink for breast cancer awareness. Lori was born September 23, 1962 in Charleston, South Carolina and was the daughter of the late Melvin Lester Webster and Dorothy Jones Webster. She attended Sullivan’s Island Elementary, Laing Middle, and Wando High School, class of 1980. Throughout her childhood, she could often be spotted biking around the Island and attending Sunrise Presbyterian Church. She earned her Bachelor of Science in Computer Science from the College of Charleston, class of 1985. To give back to the community she so dearly loved, Lori was an avid member of Alpha Phi Omega service fraternity. She also spent many hours in the harbor, crewing for the college’s sailing team. Her love for the ocean never dimmed, and Lori began catamaran racing with her future husband in the early 1990s. They placed in many local and regional regattas throughout the Southeast, even competing in the 1993 Hobie 20 Nationals. Lori began her professional career at Navalex from 1984-1987, and then worked for Naval Mine Warfare Command from 1987-1993. In the following years she served the 437th Medical Group and was honored in 1994, 1995, and 1996 as a United States Air Force Medical Service Civilian of the Year. In 1997, Lori left the government to start a family. After exactly six years of courtship, Lori wed Barry Curtis Blackburn on September 15, 1990. Their first child, Gabrielle Whitney, was born in 1998, followed by Elise Anne in 2000 and Christian Webster in 2001. Lori touched so many lives at Mount Pleasant Presbyterian Church as a Sunday school teacher, confirmation leader, Missions Ministry member, and handbell ringer. Her giving did not stop in her hometown; she participated in several mission trips to Honduras: building a children’s home, providing medical assistance, and loving every child she served. Lori never met a stranger because they were so quickly enveloped in her kind smile and earnest soul. She continually honored Jesus’s Great Commission by volunteering with Pet Helpers, East Cooper Community Outreach, I-Beam Literacy Program, and Hands of Christ. Lori’s radiant blue eyes can be seen in all three of her children, but she also passed to them her heart for service, appreciation of music, and love of reading. After a gallant 5-year fight against breast cancer, Lori peacefully left her human body and is now celebrating with the Church Triumphant. Surviving are her husband, Barry Curtis Blackburn, and children Gabrielle (21), Elise (19), and Christian (17) Blackburn of Mount Pleasant, SC. Lori was preceded in death by her loving parents and her brother, David Lester Webster (Norma). While Lori loved flowers, she also loved serving others. Donations in her honor may be made to the Lori Webster Blackburn Memorial Fund for local and international missions at Mount Pleasant Presbyterian Church.

The family of Lori Webster Blackburn created this Life Tributes page to make it easy to share your memories.

Send flowers to the Blackburn family.