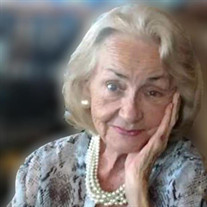 June Ketchum Yates Artmeier, age 86, passed away peacefully December 17, 2020 in Charleston, South Carolina. She was born June 28, 1934 and raised in Key West, Florida by her parents Eva May and Earl Stuart Yates. June attended Key West High School where she was voted “Best All-Around,” Captain of the Women’s Tennis and Basketball Teams, a Letter Girl, and a Clarinet Player in the Band. In her spare time, June was a fashion model and also loved swimming and boating in the clear tropical waters. In 1956, June graduated from Florida State University (FSU) with a degree in Journalism. While there, June was president of the Zeta Tau Alpha sorority, a Cheerleader, Miss Smoke Signals Queen, Vice-President of Gamma Alpha Chi and other organizations as well as a member of the Sophomore Council and Garnet Key Honor Societies. While cheering at a basketball game, June’s future husband, Richard (an FSU Hall of Fame basketball player), landed in her lap after a lay-up shot. It was love at first sight. After graduation, they were married in Key West at the Old Stone Methodist Church and later moved to Germany while he served in the Army. They were married for sixty-four years. When they returned from traveling Europe, June and her husband settled in Miami, Florida where they raised two daughters. While living in Miami, June was an active volunteer with the local garden club, Florida State University booster, and tennis player. She also worked as a substitute teacher, college placement advisor, and interior decorator. June’s garden and interior designs were featured in local magazines and newspapers. In 1992, June and her husband survived Hurricane Andrew, a category five storm. Shortly thereafter, they retired away from the coast to Mount Dora, Florida, where they renovated a home and surrounded it with tropical gardens and fruit trees. Prior to moving to Central Florida, June and her husband also built a lake cabin in the mountains of Hiawassee, Georgia, near the North Carolina border. Both retirement homes enabled her to share her love of swimming, boating, and gardening with her grandchildren. June and her husband later moved to Daniel Island just outside of Charleston, South Carolina to be closer to family. While living in Charleston, she enjoyed spending time with her daughters, grandchildren, nearby nieces from Savannah and Augusta, and son-in-law’s family. June was particularly known for her kindness, sense-of-humor, creativity, athleticism, and beauty inside and out. She loved to entertain friends and family, was an avid tennis player, FSU sports fan, collector of antiques, and sang in the church choir and with family. In addition to her many talents, she was also an accurate back-seat driver to the end, but will be most remembered for encouraging others to pause and enjoy every scenic view along life’s path. June is survived by her husband, Dr. Richard Artmeier; daughters and son-in-laws Anne Artmeier Balduzzi (Michael Balduzzi) from Stevensville, Maryland and Amy Artmeier (Greg Peralta) from Charleston, South Carolina; grandchildren Elliott Peralta, Lee Balduzzi, Madeline Peralta, and Sarah Balduzzi; and sisters Anne Burst (Winter Park, FL), Pam Yates Boynton (LaJolla, CA), and Debra Yates (Lake Worth, FL); sister-in-law Sandra Yates (Charleston, SC), Gwen Matthews (Greensburg, IN); brother-in-law John Vail (Clarksburg, IN); plus her many nieces and nephews. She was preceded in death by her parents; brother, Earl Stuart Yates, Jr.; brother in-laws Tom Burst, George Boynton, Charles Artmeier, Robert Brown, William Wilhoit, Don Matthews, David Artmeier, and Don Artmeier; and sister-in-laws Marie Yates, Geraldine Moore-Brown, Rosemond Moore, Mary Vail, Martha Wilhoit, Connie Artmeier, and Sue Artmeier. To celebrate her life, the family plans to dedicate a bench in June’s honor overlooking the Atlantic Ocean in Key West, where she appreciated many sunrises and sunsets. In lieu of flowers, contributions may be made to June’s memorial bench (https://www.gofundme.com/f/june-artmeier-bench) or to the Alzheimers’ Association (http://alz.org).

The family of June Ketchum Yates Artmeier created this Life Tributes page to make it easy to share your memories.

Send flowers to the Artmeier family.