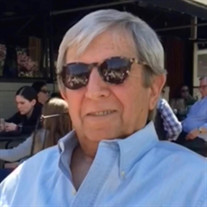 Joseph “Jay” Tota, 77 of Hilton Head Island, SC passed away peacefully and surrounded by family on September 4th, 2021 in Charleston, SC. Jay was born on February 7, 1944 to Louis and Theresa Tota in Rockville Centre, NY. After graduating from Lasalle Military Academy in 1962, he went on to study at St. John’s University and Southhampton College on Long Island. Jay married the love of his life, Joyce in 1967 and together they raised 5 children, Chris, Joyce Marie, Jon, Lauren and Noelle. He devoted his life to his children and 10 grandchildren that brought him many years of joy in Port Washington, NY and Ridgewood, NJ. Jay had a distinguished career on Wall Street where he served in several executive roles for Painewebber and UBS Financial. He continued to serve as a coach and a mentor to financial advisors even through his retirement. Jay and Joyce retired in 2010 eventually to Hilton Head Island but not before spending some time in Easton, MD where they enjoyed time with family and made many lasting friendships. While living in Easton Jay took pleasure in serving as a board member at the Easton Club East. He was a longtime loyal member of the Italian American Club of Hilton Head. He volunteered his time for various organizations including Talbot Mentors. He served as a dedicated mentor and an invaluable asset to almost all he came in contact with. He was continually offering a lending hand and always a lending ear. In his free time he spent the past decade perfecting his golf game, becoming a skilled pencil and watercolor artist and always remembering to tend to his gardens that had become the envy of many neighbors. His proudest accomplishment, though, was his children and his grandchildren. Jay was a true man of the people and his witty humor and charismatic personality never failed to lighten up a room quickly. Jay’s genuine kindness, his ability to elicit laughter and big heart made him the friend everyone wanted to be around. He will be greatly missed by all who knew him. Jay is survived by his beloved wife, Joyce Tota. His children, Chris Tota and wife Melissa, Joyce Baldwin and husband Matt, Jon Tota and wife Amy, Lauren Farley and husband Rob, and Noelle Tota, his grandchildren, Madeline Fodor, Mikaela Fodor, Grace Tota, James Tota, Sean Farley, Luke Farley, Dashiell Tota, Tyden Tota, Will Farley, and Grayson Tota. A private memorial will be held at a later date with details to follow. In lieu of flowers, a fund has been created in Jay’s name for a cause near to his heart. Please send donations to St. Jude’s Children Hospital at 262 Danny Thomas Place, Memphis, TN 38105 or by clicking this link to be brought to Jay’s personal page. http://giftfunds.stjude.org/Jay_Tota Condolences can be sent to Joyce Tota c/o Joyce Baldwin, 33 Station Road, Redding, CT 06896. The family would like to thank the hospital staff and caregivers at The Medical University of South Carolina, Hilton Head Hospital and Roper St. Francis Hospice in Charleston, SC for their care and dedication.

The family of Joseph Tota created this Life Tributes page to make it easy to share your memories.

Send flowers to the Tota family.