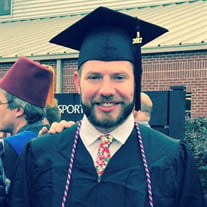 Jonathan Victor Hughes, 30, of Charleston, SC, died December 5, 2019. Jon was born in Cleveland, Ohio on March 8, 1989. He always brought his unique wit, light heartedness, and caring nature to any situation. He grew up in The Woodlands, Texas where he became an Eagle Scout in the Boy Scouts of America and graduated from College Park High School in 2007. Jon attended Texas Tech University before enlisting in the Army where he served in the infantry for4years. He reached the rank of Specialist and was based out of Fort Stewart, Georgia as a member of the 3rd Battalion, 15th Infantry Regiment with whom he deployed to Afghanistan. After being honourably discharged from the Army in 2014, he received his bachelor’s degree from Armstrong University in Savannah, Georgia and was studying at Charleston School of Law in Charleston, South Carolina at the time of his death. Jon had a deep love for his many family and friends, his country, and the law. Jon is survived by his parents Victor and Janet Hughes, sisters Meagan and Allison Hughes, Aunt and Uncle Vicki and Randy Bahr, cousins Dana Anderson Shank, Kurt Anderson, and Kris Anderson and God Father Mike Grotto. He joins at rest his grandparents Victor and Muriel Hughes, Patrick Krull, and Lucille and George Stange as well as Aunt and Uncle Susan and Jim Anderson. A Celebration of Life Service will be held in Texas at the Augusta Pines Golf Club, !8 Augusta Pines Dr., Spring, TX from 11:00am – 2:00pm. A celebration will also take place in the Chicago area – please contact the family for details on attending. In lieu of flowers, the family requests to honour his life and military service with donations to one of the following charities supporting veterans: • Disabled American Veterans: https://www.dav.org/ • Warrior Surf Foundation: https://www.warriorsurf.org/ • Information for a Charleston School of Law Scholarship in Jon’s honor will be made available in the near future. Arrangements in care of Charleston Cremation Center and Funeral Home.

Jonathan Victor Hughes, 30, of Charleston, SC, died December 5, 2019. Jon was born in Cleveland, Ohio on March 8, 1989. He always brought his unique wit, light heartedness, and caring nature to any situation. He grew up in The Woodlands, Texas... View Obituary & Service Information

The family of Jonathan Victor Hughes created this Life Tributes page to make it easy to share your memories.

Send flowers to the Hughes family.