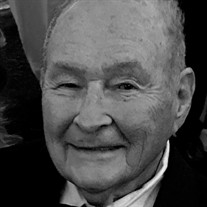 John Patrick Grundy Jr. known to all as Poppy was born on April 3, 1929 and died on July 17, 2020 at the age of 91. He was the eldest of three children. From a young age John walked to the beat of his own drum. He loved boats, trains, and planes. Family lore tells us that at 4 years of age a barefoot John hopped a train in New York and was eventually discovered by the crew halfway to Montreal. In high school, John spent summers working on fishing boats and received his captain’s license at 17. He built beautiful model airplanes and trains with amazing attention to detail. Growing up, John became known as Happy Jack. Nothing phased him, he always looked at the positive side. He had a wonderful air of friendly mischief about him. When life threw obstacles at John he never gave up until he found a way around them. With appropriate irony, John met his bride, Joan in 1952 at the Ringling Brother’s Circus. Together they formed an eclectic and adventurous partnership for over 57 years. John was a self-taught licensed master electrician. He taught himself to read intricate schematics for complicated machinery that few other electricians would dare to tackle. He was called upon by major companies to handle projects around the world. John had an insatiable intellectual curiosity and never turned away an opportunity to explore and learn. He was a perpetual student and had an amazing knowledge of history, especially military history. His knowledge of the complex geopolitical and strategic dynamics of World War II was impressive. Until October 2019, John was studying Spanish at the college of Marin in California. John was a die hard, lifelong Yankee fan who attended Yankee games in stadiums across the country. He passed this love on to his children and grands and they formed their own “Yankee Chat”. John was a true friend. His demeanor was an incredibly generous one. If a friend needed help, he was there. He gathered clothes for migrant workers and their children while his wife Joan, a registered nurse, volunteered at clinics for the children. If someone needed work, John would hire them. After retiring to California in 1999 he and Joan travelled extensively. He went bungie jumping in New Zealand at 70 and, at 86 he scuba dived on the Great Barrier Reef. He loved Mardi Gras in New Orleans. His best party memory was when an attractive Hollywood star danced with him and tried to set him up with her mother. In his eighties he braved Bourbon Street on Mardi Gras Day. At 90, he bought a new car and taught a friend how to drive. After his wife passed, John travelled between his children’s homes. He continued his global treks and whenever his children headed abroad, he was happy to follow. John and Joan worked hard raising six kids and putting them all through college. John always regretted not having spent more time with his children and made up for it by being a most involved grandfather. He was there for his grandchildren’s sporting events, recitals, and special days. Each Christmas he dressed as Santa and delivered their presents. John is survived by his six children, his twenty-one grandchildren, his five great grandchildren numerous friends and relatives, in-laws, outlaws and his much-loved brother, Jim. John has now joined his beloved wife and his greatly missed mother-in-law. We all take solace in knowing that Poppy had a good life.

John Patrick Grundy Jr. known to all as Poppy was born on April 3, 1929 and died on July 17, 2020 at the age of 91. He was the eldest of three children. From a young age John walked to the beat of his own drum. He loved boats, trains, and... View Obituary & Service Information

The family of John Patrick Grundy Jr created this Life Tributes page to make it easy to share your memories.

John Patrick Grundy Jr. known to all as Poppy was born on April...

Send flowers to the Grundy family.