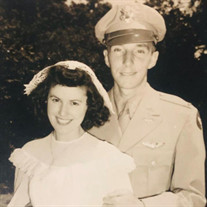 Joan Sawyer Cushman, 100, of Charleston, South Carolina passed away peacefully on Wednesday, July 29 at Bishop Gadsden Retirement Community. A native of Lansing, Michigan, she was born in Ingham County to Percy Sawyer and Athlene Zuber Sawyer on December, 25, 1919. Along with her parents, she was preceded in death by her husband Jack Cushman, her sister, Elizabeth Sawyer Routson, and her grandson Peter Cushman. Jack and Joan met in high school and married in 1944 while Jack was serving in the Air Force. Joan worked as a bank teller during the war. Following WWII, Jack completed his BA and MA at Michigan State University. Upon graduation, Jack became a teacher and later a principal, spending most of his career in Glencoe, IL. Joan worked as a school secretary in Glencoe, IL during those years. Their only child, Christopher, was born in 1949. In 1968, Jack and Joan started an educational publishing business, Christopher Lee Publications, Inc., which is still in operation. In 1975, Jack and Joan moved back to Lansing, MI where they continued to work on the family business. Jack passed away in 1996 and Joan moved to Charleston, South Carolina in 2007 to be near her son, Christopher, and her daughter-in-law, Ron’a Cushman. Joan is survived by her son, Christopher, her daughter-in-law, Ron’a, and her former daughter-in-law, Christine Cushman. Joan is also survived by four grand children; Jennifer Cushman, Rebecca Cushman, Jason(Erin Kulesia) Kulesia, Jeff Kulesia and three great grand children; Alexia Enright, Andrew Kulesia, and Aiden Kulesia. Also, two nieces, Robin Routson Floyd, Rosalyn Routson Olson(Garry Olson), and two nephews, Jeff Routson(Karen Routson) and Greg Routson. In addition, two grand nephews, David Floyd and Steven Floyd(Lori Floyd). Joan continued helping with the family business into her 90’s. At Bishop Gadsden she knitted caps for babies and later knitted caps for soldiers serving overseas. Joan had many friends at Bishop Gadsden, in particular Milton and Catherine Boykin. Jack and Joan had a wonderful fifty-two year marriage. Joan had a special relationship with her granddaughters, Jennifer(Jenni) and Rebecca(Becci), with whom Joan shared a love of animals. Joan, known to her family as “Granny”, will be missed by all for her good cheer and ready smile. Please make any donations to your local animal shelter.

The family of Joan Cushman created this Life Tributes page to make it easy to share your memories.

Send flowers to the Cushman family.