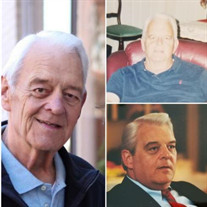 James Edward “Butch” Morris, age 75, formally of Raleigh, N.C., passed away on Saturday, December 14th, 2019, while at rest in his home in Hanahan, S.C. He is survived by his loving wife of 28 years, Barbara R. Morris; his daughters from his first marriage, Melissa M. Reed, and Diana M. Morris; and his step-children, Tonya Lynn Evans Doniphan, her husband Michael, and Stephen E. Evans Jr.; his grandchildren, Nicholos, Faith Ann, Ashley, Mackenzie, Greg a/k/a Bunky; and great-grandchild, Annalise. Many knew him, but those closest to him knew him only as Butch. He was an amazing man, with a friendly smile and quick wit. Loved his Miller Light Beer, and his bar stool buddies would tell you that he could “spin a yarn”. His stories would include some form of history, and a life lesson to learn if you listened closely. He was quick to lend a hand if you were in need, and there for you even if you didn’t. Butch honorably served his country from 1966 to 1972, as an MP (military policeman) for the Army, then completed his service in the Army Reserves till he retired in 1977. Throughout his working life, for 54 years, Butch sold heavy equipment for the North Carolina Equipment Co.; the South Carolina Tractor & Equipment, Co.; C. Ray Miles Construction & Dougherty Equipment Co.; and until his heavenly departure, Butch was still employed and working part-time in retail sales with the Sears Outlet, in North Charleston, S.C. Butch Morris was loved by all and will be missed by many! To send a memorial gift to the family of James Edward “Butch” Morris, please forward to 1204 Starling Road, Hanahan, SC 29410, c/o Ms. Morris.

The family of James Edward Morris created this Life Tributes page to make it easy to share your memories.

Send flowers to the Morris family.