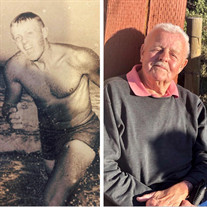 James Donald Fairbairn, 81, of Atlantic City, NJ died on December 9th, 2019. He passed away in the love and comfort of his family. Jim is survived by the love of his life Kathryn and three wonderful sons Mike, Matt, and Bob. Along with his sister Mency and his son’s mother, Kathy. As well as his fabulous daughters-in-law Vivian, Dorsey, Heather which together provided the heart-busting thrill of loving grandchildren Amanda, Tommy, Tyler, Dylan, Myles, McKenna, and sweet little Addison. And nieces Nicole, Susie, Rachael & Rebecca and nephews Chase, Stevie & Brett, and their families. Many knew him as James or Jimmy, but to those closest to him he was admirably and lovingly known as “Pop Pop”. He was a quick-tongued gentle giant with an unforgettable voice and oversized, chapter book like personality. Jim never met a stranger. Everyone was his buddy and if you were lucky enough to get a seat next to him at the bar, his stories were always grand, his glass always full, and his heart exceedingly boastful and adoring of family and friends. Jim was a champion swimmer, admired lifeguard on the Jersey shore, a graduate of American University, a Coast Guard Veteran, prevalent Washington prosecutor and then defense attorney, starting in 1967 and still taking calls until just a few months ago. After 60 plus years on the steps of the Capital Courthouse, Jim retired with his sweetheart to Sedona, AZ. in 2017. He loved arguing a good case, hot soup, cold beer, The Nats, his newspaper, and a good country song. He had a peppered vocabulary which he loved to share with other regulars at the FOP, Tune Inn & American Legion. Most importantly, he loved his family. He so treasured the relationship he had with his sons and was never shy or hesitant to say “I love you” when he walked in and left a room. He saw the good in people and taught anyone who met him to do the same. Jim was one of a kind. We are all better people having known him. He was everything to everyone. And while he may have left this earth, he will never leave our hearts. In the great words of his favorite Johnny Cash, “Well, look way down the river, what do you think I see? I see a band of angels and they are coming after me. Ain’t no grave can hold my body down…meet me in the middle of the air and if these wings don’t fail me, I’ll meet you anywhere.” We sure do hope so “Pop Pop”, because we too would meet you anywhere. If you are looking for a DUI lawyer, call God. He’s got a connection. Or if you are looking for a good story, sit next to me, new friend and I’ll tell you a great tale of the one and only James “Jimmy” “Pop Pop” Fairbairn. Rest in Peace Buddy. You sure will be missed. The pleasure was ours, Mr. Fairbairn, you will forever live on in our hearts and minds and we will be sure to tell similar tales as you have told of us. A celebration of life will be held in Charleston, SC Saturday, December 14th. A special tribute will also take place in Washington, DC in late January. In lieu of flowers, the family asks you to consider donating to the Fraternal Order of Police, https://dc-fop.org/ and give cheers to our beloved and cherished “Pop Pop”.

James Donald Fairbairn, 81, of Atlantic City, NJ died on December 9th, 2019. He passed away in the love and comfort of his family. Jim is survived by the love of his life Kathryn and three wonderful sons Mike, Matt, and Bob. Along with his... View Obituary & Service Information

The family of James Donald Fairbairn created this Life Tributes page to make it easy to share your memories.

Send flowers to the Fairbairn family.