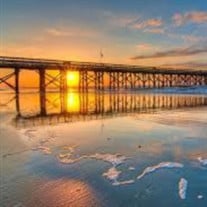 Hugh Francis O'Neill passed away in the early morning hours of Sunday, July 19th, at Bon Secours Roper after a hard-fought battle with COVID-19. Hugh was born in Kearny, NJ but grew up in Point Pleasant Beach, NJ. He is survived by his mother, Linda G. O'Neill, 78, and father, Hugh Francis O'Neill Sr, 84. Hugh most recently lived in Summerville, SC with his wife, Shelby "Mendi" O'Neill, and daughter, Asiling "Asi" Cole O'Neill, and future son-in-law John "Tex" Louis Sendziak, along with beloved dogs: Ruger, Brax and Shaemus. Hugh attended Point Pleasant Beach High School where he excelled in football and baseball. He was surrounded by some of the best buddies on earth: Dave, Joey, Bruce, Leo and Patrick. Hugh never met a stranger. He was always the first to step up when someone needed help. He was there for so many in so many different ways. In his 30+ plus years in the Food and Beverage industry, Hugh left a legacy of mentorship , leadership, work ethics, success, and friendship. He supported many charities, especially when it involved children’s services. He was passionate about everything he did, which is an understatement. His greatest treasure was his daughter. No one can even begin to put into words how proud of her he was. He wanted to be here for all her life accomplishments, but he will definitely be watching over her. Hugh and Mendi have been married for 26 years. It was at Outback where they started their journey, looking forward to some of Hugh's unrealized dreams of owning his own pub in Ireland. Hugh is survived by his sisters: Kelly Scaccianoce, her husband Bill and Christine O'Neill Weaver. His nieces: Jessica Weaver Avin, Sara Kinsy Weaver, her partner Ashley Marie Welch, Amanda Blair Scaccianoce (niece and goddaughter) her fiancé Robert Dykeman, Claire Victoria Scanccianoce and nephew, Kenneth Christian Weaver. Due to COVID19 protocols, a traditional memorial service will not take place. We will announce at a later date a celebration of life. This was Hugh’s wish from the start. Mendi and Asi will privately scatter ashes upon his wishes. In lieu of flowers, friend and family are asked to make donations to the GoFundMe campaign in Hugh's name and for your continued patronage of Cantina 76 toward their continued success. The family is also asking for donations to HughPads at Bon Secour Roper Hospital. This program started by the doctors and nurses who cared for Hugh, is seeking to buy or receive as gifts, iPads that will connect COVID patients through Facetime with loved ones who cannot physically visit or say their final good-byes. Even in death, Hugh’s legacy of thinking of and caring for others lives on.

Hugh Francis O'Neill passed away in the early morning hours of Sunday, July 19th, at Bon Secours Roper after a hard-fought battle with COVID-19. Hugh was born in Kearny, NJ but grew up in Point Pleasant Beach, NJ. He is survived by his mother,... View Obituary & Service Information

The family of Hugh Francis O'Neill created this Life Tributes page to make it easy to share your memories.

Hugh Francis O&#39;Neill passed away in the early morning hours of...

Send flowers to the O'Neill family.