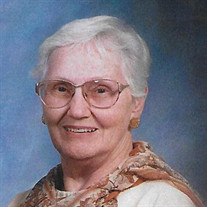 Emily Johnson Holland, 91, of Lady’s Island, SC, passed away December 20, 2021. A service in St. John’s Lutheran Church, 157 Lady’s Island Drive, Lady’s Island, SC 29907 will be announced at a later date. Emily was born February 4, 1930 in Englewood, NJ, a daughter of the late Thomas Herbert Johnson and Claire Jeanette Moody. She graduated from Tenafly NJ High School, earned a Bachelor’s Degree from Guilford College, Greensboro NC in 1950, and trained as a Physical Therapist, Duke University. In September 1, 1951, she was wed to her loving husband David Ross Holland. Emily was employed as a Physical Therapist, first at Columbia Presbyterian Hospital in New York City, later (after her children were established in school) at Kent General Hospital in Dover DE. She helped to establish Physical Therapy services in several non-hospital settings, including schools for handicapped children and nursing homes. An avid gardener and landscaper, the family home in Dover was beautifully landscaped, with something in bloom the entire growing season. Emily reported at one point there were 17 species / colors of azaleas in the yard. With a life-long love of music, she played piano and was a founding member of the Bell Choir at her home church. frequently involved in chancel choirs and the Delaware Choral Society, including a by-invitation performance of John Rutter's Requiem at Carnegie Hall, conducted by the composer. Emily was world travel and enjoyed camping and trekking. She had visited 146 countries, most as trekking or climbing adventures. She climbed Mt. Kilimanjaro, Mt. Kenya, Uncompahgre, and several others. On her 60th birthday, she crossed Annapurna Pass in Nepal at 19,700 ft. She assisted in a rural solar-electrification project in Nepal and scuba-dived on Cousteau reef-conservation projects in the Caribbean. Emily was a long-time member of Delaware Nature Education Society, Sierra Club, and others. She is survived by 2 Children: Steven R Holland and his wife Shirley Holland of Beaufort SC and Tracy Louise Holland and her husband Eric Hubbs of Aloha, OR; and one grandchild, Adrian Hubbs. In lieu of flowers or casseroles, please consider gifts in her memory to Roper Hospice Cottage, 676 Wando Park Blvd., Mt. Pleasant SC 29464.

The family of Emily Johnson Holland created this Life Tributes page to make it easy to share your memories.

Send flowers to the Holland family.