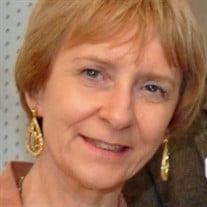 Diane Frances Anderson of Mount Pleasant, South Carolina, passed away on December 11 in her home at the age of 76. Born in 1945 in Michigan, Diane was the daughter of Wendall and Phyllis Haner. A graduate of Purdue University with bachelor’s degrees in both Spanish and English, she married Karl Eric Anderson in 1967. In the early years of their marriage, she and her husband and children moved to Edinburgh, Scotland, where Eric worked on a research project for the British government, and she received a postgraduate degree in social administration from the University of Edinburgh. As part of her postgraduate work, she helped to establish a social and childcare center for single parents in one of Edinburgh’s poorest areas. Following their stay overseas, she and her family moved to Reston, Virginia. During her career, Diane was an editor, a publications designer and manager, and a marketing manager for magazines, book-publishing companies, engineering firms, and federal agencies in the Washington, D.C., area. In 1999, she and her husband relocated to Mt. Pleasant, South Carolina, where she continued to work as an editor. Diane and Eric especially enjoyed traveling in the United States and overseas. She had a passion for genealogy and often helped others discover their family histories. She served as the newsletter publisher and secretary for a family association for 32 years. She also actively contributed to her neighborhood and local community. Survivors include her husband Eric; son Brian Anderson and his partner Javier Perez of Washington State; daughter Tara Anderson of Virginia; sister Jean Haner of California; nephew Jeffrey Dong, also of California; five grandsons; a great-granddaughter; a great-grandson; beloved cousin Carol Duncan of Florida; and “chosen” family members Kathleen, Dave, Katy, and Mychal Miller of Washington State. In lieu of flowers, please make a contribution to a charity of your choice

Diane Frances Anderson of Mount Pleasant, South Carolina, passed away on December 11 in her home at the age of 76. Born in 1945 in Michigan, Diane was the daughter of Wendall and Phyllis Haner. A graduate of Purdue University with bachelor&#8217;s... View Obituary & Service Information

The family of Diane Frances Anderson created this Life Tributes page to make it easy to share your memories.

Send flowers to the Anderson family.