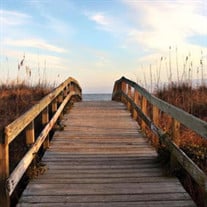 Darrell Eugene Farley “Papa” went to heaven on February 25, 2021 at the age of 79 in Charleston, SC. Darrell is survived by his two children Lori Farley Bates and Darren David Farley, his son-in-law David Gustave Bates, his daughter-in-law Sandra Farley, his four grandchildren – Cali Costa Bates, Ashlyn Ellis Bates, Dakota James Sewell, and Dillan Eugene Farley, his siblings - Wanda Farley Hall, Joyce Farley Athey, and Billy Jene Farley, and many, many nieces, nephews, great nieces, and great nephews. He was preceded in death and is now reunited with his wife and the love of his life Angeline “Angie” Costa Farley and his siblings Annie Farley Daniel and Shirley Farley Goss. Darrell was born on April 27, 1941 in Saxon, West Virginia to Leslie Frank and Edna Phillips Farley. He was always a hard worker and eventually became a master baker, managing and owning full-line bakeries with his wife, Angie, in Virginia, Florida, Alabama, Pennsylvania, North Carolina, and South Carolina. His interests included family, gardening, cars, fishing, mowing the grass, tinkering on anything mechanical, pets, and watching TV. Darrell had a great sense of humor but was best known for his quiet gentle soul and willingness to give you the shirt off his back. The family would like to extend a special thank you to Dr. John Terrill Huggins who cared so much and so well for Darrell over the years and to Dr. Blaithin A. McMahon for her kind heart and great care, as well. A service celebrating Darrell’s life will be held at 4:00 PM Saturday, March 6, 2021 at the home of David and Lori Bates – 6061 Postell Drive, Ravenel, SC 29470. In lieu of flowers, donations may be made to the Kidney Disease Research Fund #8310 at the MUSC Foundation, https://connect2.musc.edu/giving

The family of Darrell Eugene Farley created this Life Tributes page to make it easy to share your memories.

Send flowers to the Farley family.