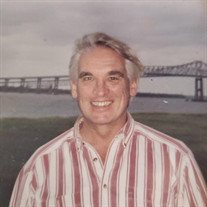 Charles ‘Chuck’ Andrew Stjern, 75, of Mount Pleasant, SC, husband of Terrianne Thompson Stern, passed away on November 27, 2021. A native of Chicago, IL, Chuck is survived by his wife, brother David Stjern (Mary), stepchildren Erik Walker, Adrienne Walker (Melissa), Jared Alverson, and Sarah Howard, three grandsons, a granddaughter, and numerous cousins and kin. He was preceded in death by his parents Nels and Irene Peterson Stjern. Chuck graduated from Northwestern University and spent most of his working years teaching. He was a much-beloved teacher at Pinewood Preparatory School in Summerville, where he taught everything from history to A.P. Human geography. The 29 years he spent teaching at Pinewood brought him and his family much joy and many exceptional friendships. Chuck also taught for many years in Chicago and for a time in Rhinelander, Wisconsin. A lover of the outdoors, Chuck enjoyed camping, canoeing, and hiking –passions he passed along to his family, friends and students. Many of his endlessly entertaining, though possibly exaggerated, stories centered on trips he took with colleagues turned valued friends, his boyhood buddies, and his family. Chuck was a U.S. Army Vietnam veteran, as well as a keen historian and educator. These factors led him to volunteer for several years as a guide on the U.S.S. Yorktown at Patriot’s Point in Mount Pleasant. He enjoyed this time both for the tours he gave and for the friends he made. A family remembrance will be held in the future. Donations in memorial can be made to the Pinewood Fund, the Arthritis Foundation, or Dorchester Paws.

The family of Charles Andrew Stjern created this Life Tributes page to make it easy to share your memories.

Send flowers to the Stjern family.